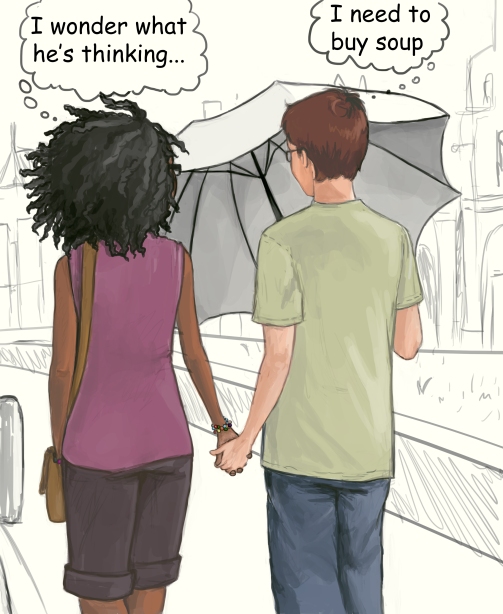 This illustration is over a year old, and I’ve been thinking about this note for weeks now…anticipating it, dreading it, knowing that I have to do it, but also knowing that the pressure to write is fully self-imposed. I’ve started this paragraph with only glimpses of thoughts I might want to flesh out here. (pause) Perhaps I’ll write about similarities and differences: black, white and a single shade of gray… this Feb 10th, for my annual Valentine’s note.
It’s been an interesting journey thus far dating my boyfriend. We’re different in many ways: different in race, in beliefs, in nationalities, and it’s led to a very rich learning experience, but also to the accompanying challenges. Much more than before, I’ve come to appreciate how being black and being brought up in the Caribbean context has shaped how I view the world, the biases I perceive and my unique brand of ignorance. Being in this relationship has shattered what little belief I had in my own objectivity. I’m much more aware that I’m a subjective reflection of my past experiences, and it’s become more difficult to not look at each person as similarly inhabiting their own narrow, but rich, frame. I’ve also grown to see how him being a white guy growing up in England has shaped perspectives he has of the world on a fundamental level. We’ve had intense debates on random topics from predictions in Game of Thrones, to wrongdoing in FIFA, and when we got to the core of it, we realized that a lot of our disagreement was framed by the historical and cultural perspectives we grew up within… weighty entrenchments in colonialism, imperialism, nationalism, ethics, philosophies of life, good, origin and other experientially informed histories and ideologies that I’d not been aware were affecting our views of the world to the extent that it was.
I guess one of the big moments for me was when we challenged ourselves to guess the actual statistics on the occurrence of racism in the UK. I overestimated it, and he underestimated it… though he underestimated by a greater margin than my overestimation. I couldn’t hide from the reality that as much as he was my best friend, and as much as I loved him, there was a disconnect in how we receive the world based on the histories we were taught and the experiences we’ve been surrounded by. My ignorance is different to his, but I’ve become very aware of how little I know about the struggles English people, or Europeans have endured, because of my special preoccupation with ‘black’.
I honestly have been taken aback by how little I know, and how little we all seem to know about each others’ experiences and histories. I feel as though I’m floating, slightly disoriented, through an ocean of reality I’d never noticed before because I was trapped in a cloudy bubble of air. I’ve become so much more aware of how it can shape how we might view dilemmas or the depth of any people’s gripes and voiced struggles. So I’ve been earnestly trying to learn more about history and culture around the world. It’s been quite a journey and I’m grateful for the discussion, the thought, the maturity, the confusion, the questions it posed and the answers since found.
What initially drew me to David though was what I call his ‘weirdness’… it was the most in sync weirdness I’ve ever found to my own. I felt like he appreciated and understood me like no peer ever had before. However, as I’ve grown alongside him, I’ve come to cherish not only our shared ‘weird’, but also our differences… it’s pushed me to see the world, see others, learn and empathize with a sincerity, understanding and depth that I’d never before known.
——————————————————————————————————————————————————— To support me in funding my PhD studies, please hire me to do an illustration. Message me (kalifadamani@gmail.com) if interested and spread the word ^_^
! To donate (if you don’t want to hire me): https://www.gofundme.com/tfe68rs OR Paypal:kalifadamani@gmail.com