I’m coming to the end of Downton Abbey, and so I’m looking for the next English (or, pretend English) show to watch. I’ve been hearing and seeing a lot about this Doctor Who, and judging by his name I assume that he’s supposed to remain a mystery. However, I am curious and I want to know who’s Who, what’s what and why. With several seasons in existence, from however way back when, I don’t know whether or where I should start. This short note therefore is basically a plea for advice. Is Doctor Who worth watching? If so, where should I start? If not, what else and why? Thanks!

It was so nice to hear another Trini accent, to see a familiar face and to hear someone talk about “crossing the road like a Trini”….all things which are so common in Trinidad and Tobago that they go by without any notice. Last weekend I went to London for the first time, and also, for the first time in England saw someone I had studied with previously. The guy in the picture was in my Psychology year group in UWI, and is now studying music in Bristol.

It actually was a bit weird seeing him in the UK, because although I knew that he was there, the world seemingly shrank when it hit me that we’re meeting in London and not St. Augustine. Apart from Trini linkages, London was really an experience. It’s quite different from Cambridge, and I plan to visit again some time. I jotted:

“From Coldplay (Cambridge) to The Heavy (London)”

“There’s a nonsensicalness about the place that’s extremely alluring”

Still though, when I got back to Cambridge late in the evening, I felt the most unexpected sensation. My heart began to beat slower (until then I hadn’t realised that it was beating kinda fast), I suddenly felt more relaxed, and the strangest thought came into my mind: “It’s so nice to be back home!”. Somehow, somewhere in my mind, Cambridge has become associated with homely comfort. Cambridge, this city that seemed so foreign, so weird, so different just over a month ago has now morphed into somewhere that I feel somewhat at peace in. I looked at the multitude of old buildings, leaves on the street, and emptiness of the place (as compared with London), and I smiled. The tree with low hanging branches that annoys me when my hair sometimes hooks up on it felt like it was patting me gently on the head saying “Welcome back Kalifa, I missed you”. I had probably the most relaxing walk that I’ve ever had since coming here that night… because for the first time I think I felt like I belonged to somewhere in the UK. In Cambridge I’m just an alien, in London I’m an alien squared. Still though, I like London…

**written about a week ago…also I hate how I look in the first picture, but that’s the one my friend was smiling fully in so yeah…J**

I remember when I first entered England, and looked around at the magnificent buildings, one of the thoughts that entered my mind was “So this is what my forefathers helped build. This is where the sugar, log and rum money went. Everyone in the Caribbean should have the opportunity to experience this.” I’m not sure why that thought entered my mind when it did, but I couldn’t seem to stop myself from thinking it then… ‘this is where the money went, part of this is ours…’

I remember telling mummy that thought when we were walking around Cambridge, when daddy kept mentioning his astonishment at how organised everything seemed to be in England. I remember thinking that the organisation was partly built on the backs of many people who never saw or knew what they were working for….and I remember thinking that I want people back home to live this experience with me– because we deserve to, because we have a right to. I remember thinking that I want people back home to know that if they wanted to come here and enjoy their ancestor’s hard work, if only for a while, that they could…that it was possible (even though it often doesn’t seem that way for many people, like me). So, I decided that I was going to write…and that’s the beginning of that.

Skin. The only thing that I heard when I was back in Trinidad, about skin changing in cold countries, is that it might become slightly lighter because of the lack of sun. I could deal with that if it happened. It’s not painful. It’s not irritating; and I could easily get back to my lovely, sun-kissed full-chocolateness when I get back to sunny Trinidad and Tobago.

But no-one told me about the itchiness, the dryness, or the flakiness.

At first I assumed that it was the water…maybe because the water is chalkier in the UK it was doing some bizarre thing to my skin (?).

Then (based on what someone said) I figured it was the bar soap I used…maybe shower cream or gel will be less harsh on my skin (?)

Then I figured it was my clothes….maybe I should wash my pants after one wear (?)

Neither of the above was the issue.

So, what causes the problem?

Well, turns out it’s that good old cold weather. I already mentioned that it hates me, but never did I think that its vengeance was so far reaching. The weather doesn’t only make you feel cold, but it makes your skin itch, and can have you scratching as though you went a week without bathing after rolling around naked in grass.

Apparently it achieves this by drying your skin until it becomes flaky, at which point it begins to itch….sometimes mildly, sometimes like crazy. My thighs tend to itch the most, followed by the sides of my belly and lower back. I don’t know why those specific areas.

Now, this probably doesn’t happen to everyone, but in the event that you are planning a trip to one of these cold countries, I’d say to be prepared to intensify your moisturizing routine. Moisturized skin infuriates the cold weather.

Partially related mention: I also watch my body in amazement after I take off a piece of clothing and the hairs on my arm stand up at complete attention. I’ve seen my hair rise before, but never like this…hair rises dramatically here (exciting stuff!).

***The accompanying piece was inspired by Orchid’s and Mark Gellineau’s work together.*** 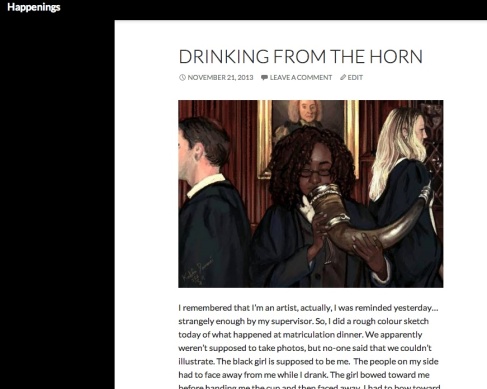 Several people have encouraged me in this direction and I’ve finally given in and created a blog ( https://kalifadamani.wordpress.com/ ). It’s on WordPress, it’s very simple, and I’ve posted my past experiences there and will be posting future ones as well. I was previously hesitant on two grounds:

Nevertheless, blog is there and blog is online. Hopefully those of you who encouraged me to start it would back me up…at least for 1 week. We can then observe whether it grows wings, or if it sinks like the Titanic.