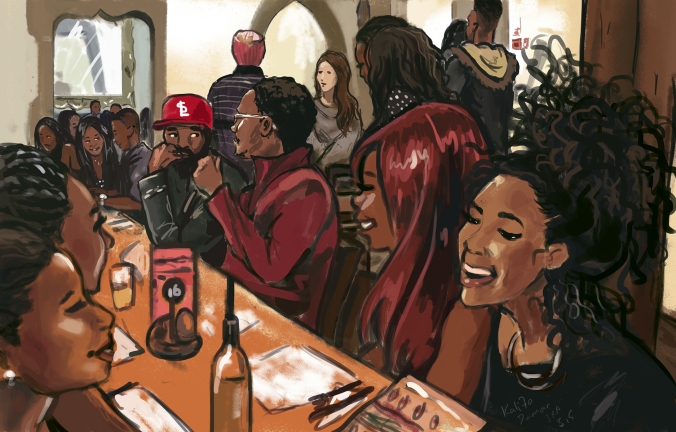 I’ve never seen so many black people in one place in Cambridge. The African and Caribbean Society organized a lime at Nando’s. The first 30 people to get there got their dinner free, up to a maximum of £10 (I got something costing £10.35— the extra 35pence was allowed free—yayy!!). SEO London sponsored it. I got there quite early; ‘early’ because I wanted to ensure I got free food, and well, ‘there’ because I wanted to see black people. By ‘see’ I really mean just ‘see’, as in ‘look at’. It sounds creepy, I know. It’s a bit sad I guess, because I wasn’t particularly keen on socializing. I honestly just wanted to see people who looked like me so that I’d feel less like an anomaly in this city. Sometimes I want to stand out, other times I want to feel like I fit in, blend in… and being there in a crowd of black people, black students at Cam Uni just made me feel like I belonged there. When I arrived, there were about 6 other people already waiting outside the restaurant. I smiled at 2 of them that caught my eye. Either way, I waited, and more and more people crowded the pavement outside the restaurant. Soon enough, over 30 black folks, 3 white folks and an Asian girl were waiting outside the restaurant on the street for the lime. I looked at passers by look at the crowd, stare at times… obviously a bit amused, or confused. I don’t blame them, it’s strange seeing a large gathering of black people on the streets of Cambridge. Nando’s soon enough cleared the tables and the group, which probably amounted to around 60 by the end, went in and took up about half the restaurant. I didn’t speak much. I worried that folks would think me standoffish and weird because I was so quiet. Maybe they did think that. I was tired, and well, since I really just wanted to see the existence of young, black folks at Cam Uni, I pretty much got most of what I wanted out of the night before it really began. I ultimately ordered my free food though… it was good: Butterfly chicken burger sumthin with mango lime sauce and chips. Most members of the ACS are British with African and Caribbean ancestors. When I first got to Cam two years ago, I went to a group meeting they had to feel like I belonged. They were super nice…. But I felt sort of out of place because it wasn’t the ‘Caribbean’ I had imagined. I’d hoped to hear Caribbean accents in abundance, but I didn’t… and thereafter I made effort to find other Caribbean folks in Cambridge. At the time I realized that I felt closer to Caribbean folks, regardless of race, than I do to black folks who aren’t ‘Caribbean’ (generally speaking). It was an interesting realization… because perhaps for the first time, I came to know that in terms of identity, I see myself as ‘Caribbean’ before ‘black’.