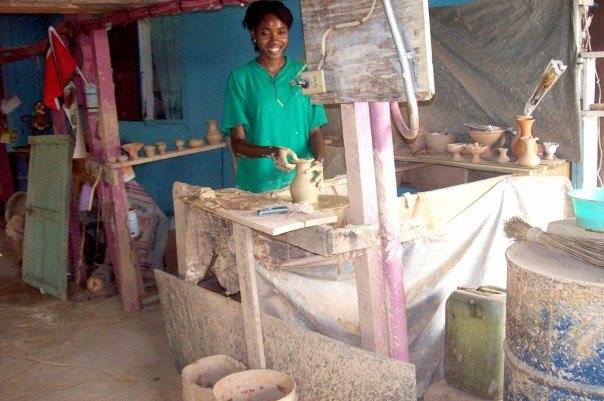 In October 2007, I wanted to learn how to make a clay pot, and on my way to visit my grandmother in Freeport, I’d usually drive past a house in Chase Village with a shed at the front. Under and in front of the shed would always be filled with various types of clay pots, and in October-November, it would be filled with diyas because of the upcoming Divali/Diwali festivities. An old Indian man would sometimes stand under the shed, molding away at his potter’s wheel… and one day I decided that I’d stop and speak to him. I pressed the buzzer in the green band maxi for it to stop, I exited, and nervously walked into the yard to ask the old man about his pots and pottery. I told him that I wanted to learn to make a clay pot and asked whether he had any advice for me. He smiled, and then to my surprise, rather than just giving me advice, he invited me to the wheel and started teaching me pottery. Pottery was the family business, and when he became tired, other members of his family would take over making pots. The old man did most of the pottery on the wheel, and others helped with baking in the kiln… though they were also very good at making pots too.
I felt a bit awkward, not because the old man and his family treated me in a strange or offputting way, but because the opposite happened: they were all needlessly kind, made me (a complete stranger) feel at home, and were willing to take time out of their day to explain to me about making various types of pots, their diyas, and what they do. I made a little pot, a big pot, and a diya I think. I messed up a lot. The old man and his nephew (or he might have been his grandson) made the pots so effortlessly, and over and over again they’d let me try, and I’d mess up completely: the pot I made might be too thin, so it’d crack in the kiln and I’d have to do it over, OR I wasn’t properly guiding my hands and the clay would fly off the wheel. If they were frustrated with my slow progress, and my consistent mistakes, they never showed it, and I was invited to visit them until I got it right so that I could make a proper pot of my own.
I eventually did get a pot right, and I felt incredibly proud when my baked pots came out of the kiln and they presented it to me. They never wanted anything in return for the time and clay they spent on me, and I felt indebted to them. I thanked them for being so kind to me and for teaching me to make pots, and ever since then, I’d pass that house whilst in the maxi to my grandmother and think of how special the family made me feel.