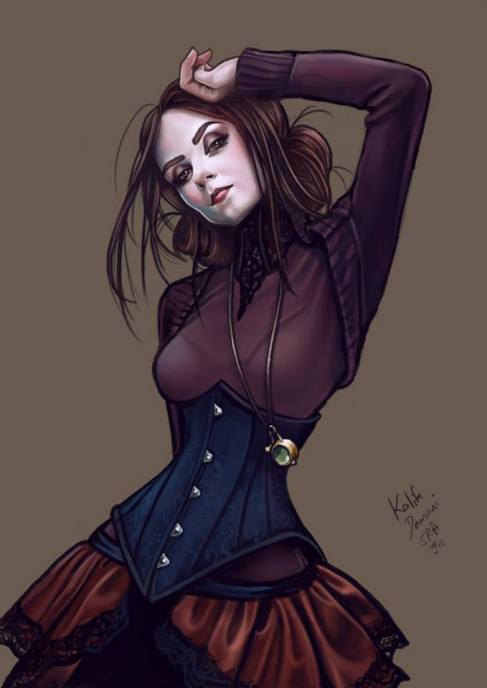 I’ve been asked several times since coming here, “You must have to get accustomed to so much, what’s different?” I usually say the weather, or the manners of the people…never do I mention how odd it is for me seeing so many, and such a wide variety of white people. I mentioned that last week to a white guy though… he replied that where he’s from he doesn’t see much else but white people. I’m pretty sure that I look a bit strange to him in some ways. I know that my hair certainly is strange to some. There are white people with dreadlocks, straight hair, in gothic apparel, in bohemian clothes, in suits. It’s all very new to me, and ensures that a day walking, or just sitting and looking around would be absolutely fascinating. From an artistic point of view, everyone seems like a character, and I more often than ever feel like painting. The painting (with this note) was inspired by a lady living here in Cambridge for example… how can you not want to paint or sketch when you see someone who looks as interesting and cool as she does?

White people raking leaves, driving garbage trucks, white people doing all manner of things and from all manner of backgrounds. It’s outlandish to me, overwhelming at first. Ah mean, you probably could live your entire life in Trinidad and never meet a white person. Not only that, but the white people in Trinidad often have those office and managerial type jobs…not anything to do with manual labour and serving. I figure that in a country with a majority of white people, like England, someone has to do those jobs, but I don’t think it particularly occurred to me before I came here that many white people do those things. I know that it sounds naïve; but all my life I’ve been seeing the vast majority of white people do high paying work, having authoritative jobs, working in offices, living in the posh areas, being privileged…so it was weird having a white lady come in and clean my room. It just looked completely odd.

In a fair world it wouldn’t at all seem strange….but.