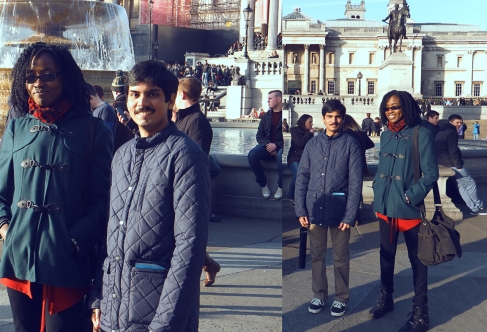 It was so nice to hear another Trini accent, to see a familiar face and to hear someone talk about “crossing the road like a Trini”….all things which are so common in Trinidad and Tobago that they go by without any notice. Last weekend I went to London for the first time, and also, for the first time in England saw someone I had studied with previously. The guy in the picture was in my Psychology year group in UWI, and is now studying music in Bristol.

It actually was a bit weird seeing him in the UK, because although I knew that he was there, the world seemingly shrank when it hit me that we’re meeting in London and not St. Augustine. Apart from Trini linkages, London was really an experience. It’s quite different from Cambridge, and I plan to visit again some time. I jotted:

“From Coldplay (Cambridge) to The Heavy (London)”

“There’s a nonsensicalness about the place that’s extremely alluring”

Still though, when I got back to Cambridge late in the evening, I felt the most unexpected sensation. My heart began to beat slower (until then I hadn’t realised that it was beating kinda fast), I suddenly felt more relaxed, and the strangest thought came into my mind: “It’s so nice to be back home!”. Somehow, somewhere in my mind, Cambridge has become associated with homely comfort. Cambridge, this city that seemed so foreign, so weird, so different just over a month ago has now morphed into somewhere that I feel somewhat at peace in. I looked at the multitude of old buildings, leaves on the street, and emptiness of the place (as compared with London), and I smiled. The tree with low hanging branches that annoys me when my hair sometimes hooks up on it felt like it was patting me gently on the head saying “Welcome back Kalifa, I missed you”. I had probably the most relaxing walk that I’ve ever had since coming here that night… because for the first time I think I felt like I belonged to somewhere in the UK. In Cambridge I’m just an alien, in London I’m an alien squared. Still though, I like London…

**written about a week ago…also I hate how I look in the first picture, but that’s the one my friend was smiling fully in so yeah…J**