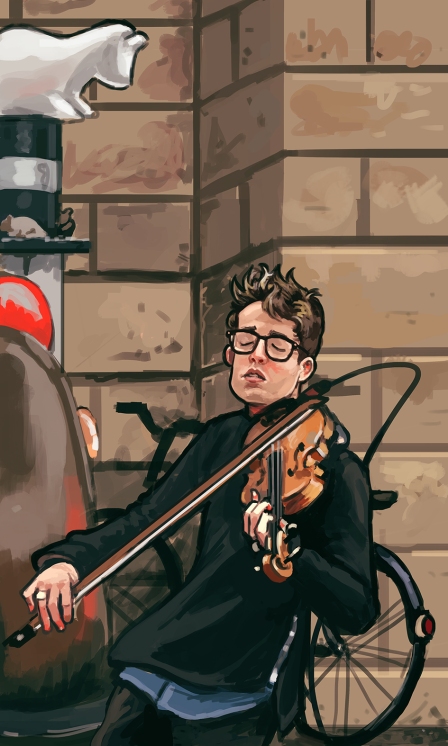 This is a sketch of a violinist I saw opposite the Cambridge Market​. It’s a spot that many people tend to come and perform at at various points in time. There is an interesting piece of sculpture in the area, with some mice walking around a black and white pole and a cat standing atop looking down. Across the street, fruits, veggies and a range of other market type things are sold, and many people often frequent the area. I imagine that that’s why so many performers choose the spot (because it’s busy) though I like to imagine that the mice and the white cat also have something to do with it. ^_^ The violinist’s name is Joel Grainger​… the name was written down on a sign in front of his performance area. I stood there for a while listening to him, enjoying the performance and being a bit jealous that I couldn’t play a violin myself. I figured that I’d draw the moment, because I quite enjoyed it and I thought it would be nice to share it.
After thinking some time on writing about it though, I began to feel a strange sense of insecurity; quite unrelated from anything to do with playing violins, but related instead to what I ‘should’ be writing about. Often enough, I come on Facebook and see folks, educated folks, talking about the recession, the economy, education, politics… serious stuff. I write about serious things from time to time too, though most times, if ever I write about a serious thing, it mostly centers around ‘identity’. I thought to myself, “Kalifa, you’re supposed to be an academic, an intellectual, a smart person who’s critically engaged with serious stuff; where are your posts offering opinion and critique of all the current events and news stories? Instead, you’re thinking about writing about violins, cats, feelings and random experiences.” It’s true, I quite enjoy writing and thinking about random, ‘light’ experiences. I like sharing them, drawing them, and I do feel some sense of guilt surrounding that; because I sometimes feel like maybe I should be more like other folks and comment on all the serious current events going on in T&T and around the world.
I’d like to think though that there is a place for me in the sea of opinion and experience that is social media. Perhaps I’m not quite the best at social, economic and political commentary, but I do think that I do a fair job at just documenting little joys and sorrows of life. 🙂
—–
To support me in funding my PhD studies, please hire me to do an illustration. Message me if interested and spread the word ^_^ Thanks!
To donate (if you don’t want to hire me): https://www.gofundme.com/tfe68rs OR Paypal:kalifadamani@gmail.com