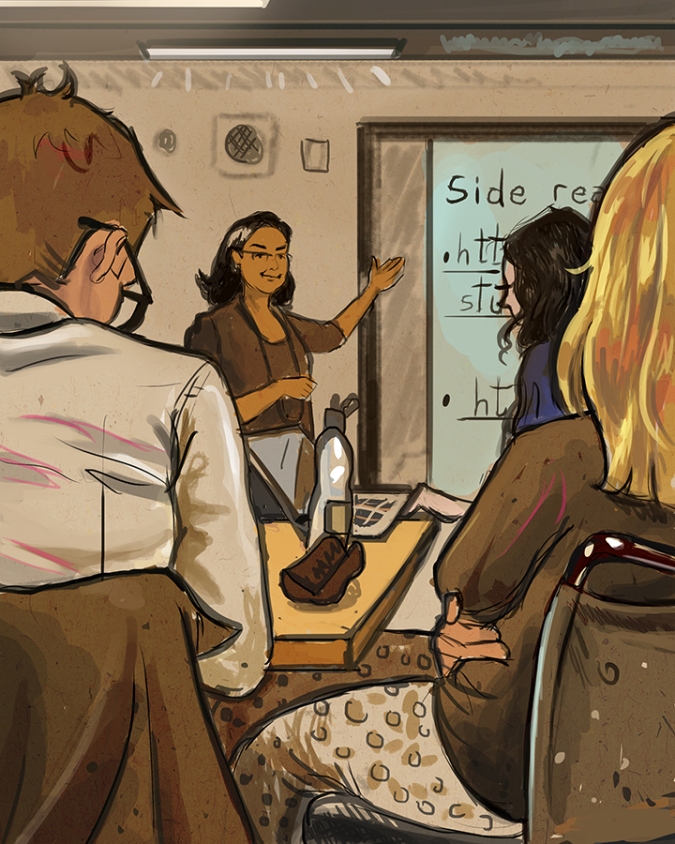 I haven’t yet written about actually starting my Phd; which is what I’m here for. This post remedies that. We’d been sitting down through induction lectures… I’d enjoyed them very much; they did what they had to do quite well and I left feeling at ease about what I’d chosen to pursue. Over the course of orientations, Dr. Nidhi Singal, FERSA, the librarians and Doctors Panayiotis Antoniou and Riikka Hofmann presented. As is common with inductions and orientations though, we had a ‘get to know each other’ activity. I had chosen a blue sheet of paper from a box at the front of the classroom for the activity. Written on it was “I used to work on Japanese prime-time TV (Fugi TV channel) with ‘Beat’ Takeshi Kitano.” I didn’t know of this ‘Takeshi’, but my task was to find the person who wrote about working on Japanese TV with him, whilst someone who would have chosen my paper, had to find me. There were about 65 students in the room, and my eyes first darted to various Asians. I knew that anyone, not just Japanese Asians, could have worked on Japanese TV. I even figured later on that perhaps the person who’d think it interesting to write down that they had worked on Japanese TV might actually not be Japanese (and not look like a typical Japanese person would) at all, but still, in my mind, I figured that an Asian, Japanese person most likely wrote it down. So, after narrowing down my search, I went around saying ‘Hi, did you work on Japanese TV?” to various people who looked more likely to be Japanese; that is, the East Asian folks. A Taiwanese (I think that she said she was Taiwanese) girl gave me a confused ‘Whattt?? Noo” look. Various other folks we just like ‘No, that’s not me”. We all had one clue, and that was the colour of the piece of paper the person was holding. I had written my note on a green sheet, but had chosen the note of someone who wrote on a blue sheet… and so I went around primarily meeting Asian looking folks holding blue sheets of paper. After having a couple people ask me if I was their person, and after asking a few people myself if they were mine, I figured that I should ask more non-East-Asian looking folks. I asked a girl who looked Indian, a white girl, a white guy, and I kept going around asking folks… but I couldn’t find the person whose paper I got. I stood still for a moment, looking around the room, and began slowly walking again. Just then, a cheerful, full-figured, middle-aged white woman with a British accent stopped me and asked if I am an artist who did such and such. My face lit up, and I said ‘YES!!” That’s me!” She looked all ‘YAYY!!’, I smiled all ‘YAYY!’, and then there was a brief moment of silence. I looked at her, already fixing my face into an expression of ‘I know this might sound weird asking you, but…’, before asking her “By chance, did you work on Japanese TV?” She lit up, laughed and said “YES!! I did, with Takeshi Kitano. What are the odds that we got each other’s paper?!! We should get a mathematician to calculate that!” We both laughed, and continued chatting. She’d lived in Japan for 8 years, and like me, was also doing her research on Educational technology. It was a lovely meeting. She was a wonderful person. I did feel pretty stupid though after for having assumed that the person whose paper I got was most likely Asian. It was a great exercise though… It reemphasized for me that you can never appreciate the rich intricacy of someone’s story just by looking at them.