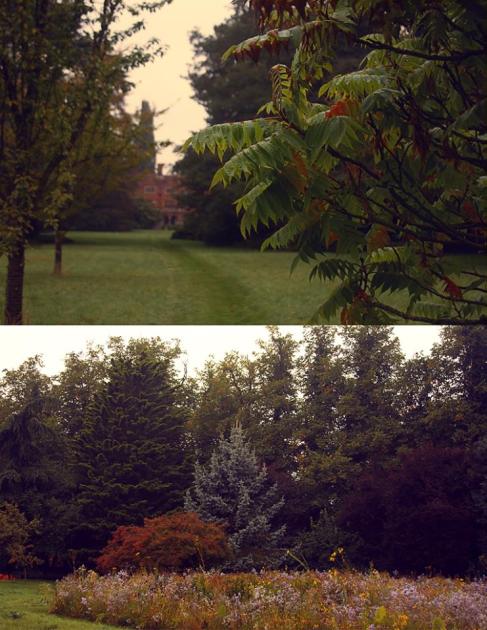 I stay at an old Victorian house. These are pictures of portions of the backyard. I woke up early one morning and decided I’d walk around and explore. I got as far as where I stood to take the top picture before deciding to turn back around. There was still a long way to go to reach the end, but I wasn’t up for the walk. There is a path to the side that winds through something that feels like a mini-forest, and it’s all very beautiful. When I first arrived, people were playing croquet in the back yard…knocking little balls through tiny ‘goal posts’ with a giant wooden hammer.It’s very still and peaceful in the house. The house is often very quiet, with the silence being occasionally broken by someone playing the piano downstairs, or maybe even a person practicing their singing. At times I feel as though I was thrown into an English period film. At night, if people are downstairs by the bar or ‘waiting area’ I may hear them speaking…but it’s often not loud. Squirrels scurry up the trees and on looking outside one morning I’m almost certain that the animal I saw was some type of deer.

Hung on the walls are framed paintings and drawings of various men who I assume to have been important within the college. Right outside my room there is a shelf with old books, and on the window sills sit old pieces of china.

Someone comes to clean inside our rooms once every week. The idea of that just seems quite odd…I thought that that only happened at hotels, inns and guest houses.

As far as I’ve seen, six people live in my house, and a seventh person has a room here. There are four guys and 2 girls. The 4 guys and the other girl all sounded English (although the girl’s accent isn’t so much), so I assume that they are. They’re all white, except one guy who seems mixed with Asian. I’d be lying if I said that I didn’t feel slightly out-of-place and odd here being black, Caribbean and trying not to speak dialect.

There is a certain ‘poshness’ about the place, the city even, that’s hard to ignore, but sometimes difficult to put your finger on. I guess that it’s the expense of things, the antiquity, maybe the way people behave generally, maybe the events.Tomorrow please God we have Matriculation in gowns and formal wear, as well as a dinner in a very fancy hall. Every night thus far there have been these social events at the house as a sort of orientation. Tonight it’s ‘Curry and Condom’ night…I really have no idea what that is about…but people sound happy though. I rarely took part in ‘fun, crowded, social stuff’ at UWI, and I’ll likely not take part often here either. Being quite introverted, I’d have to work up quite a bit of energy to go through those…with large groups, knives and forks, wine, cheese, beers, expense, standard-English-speak and all… things that I am not comfortable with.

There is a bar downstairs, a kitchen where they cook meals for us (we can charge those to our University ID if we want), a dining room, piano, TV and game rooms. Students from surrounding houses/accommodation in the estate all come here to ‘lime’ (I’m not sure what they call ‘liming’ here)….but I may still hear very little or nothing from my room. There is a swimming pool and gym somewhere in the area of the estate…I haven’t found them as yet. There is also a large field for sports as well as other sporting facilities.

The people in the house seem nice, polite, cool, they say ‘hi’- not as friendly, noisy or ‘concerned about your participation’ as Caribbean people, but nice. I like them that way…cuz I’m a bit like that too. Those who don’t live in the house, but who come here to chill may just pass you straight and completely ignore you if you say “good afternoon”… but some might say ‘Hi’, some will force a smile.. and I’m completely confused as to how I should interact with them. Maybe if I attended the social events I won’t have that problem…so I guess that’s on me.

The site manager is very friendly and helpful. I locked myself out of the house (by the gardens) once and felt very embarrassed..he was chill about it, he didn’t make me feel stupid. I sometimes wonder if he sits with a list and studies names because he refers to all by name and seems to be very aware of everyone. He has been calling me ‘Kalifa’ since I arrived, and I think that he pronounces my name better than many Trinis do.

I’m still adjusting…and I’m still learning.
The English people say ‘cheers’ instead of ‘thank you’. I don’t think that that will ever catch on with me- it just sounds weird to me